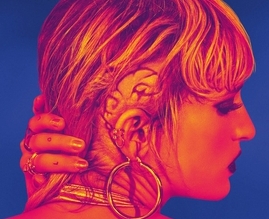 It's dark, it's twisted and you may have to avert your eyes during this ultra violent cinematic experience. It doesn't get much bolder than this.

Following a series of unexplained crimes, a father is reunited with the son who has been missing for 10 years. Titane: A metal highly resistant to heat and corrosion, with high tensile strength alloys.

I always like to make a point of checking out the winner of the Palme d’or at Cannes whenever it ends up in UK cinemas, and I was doubly interested in ‘Titane’ given it was directed by Julie Ducournau who made the excellent ‘Raw’. You may have read about this film in the press as it’s been dubbed as the film where a woman has sex with a car, and it is that, but it also so much more and it’s one of the boldest and original movies I’ve seen not just this year, but in any year.

It begins with a car crash that leaves a young girl called Alexia suffering a serious head injury that requires a titanium plate fitted in her head, leading to a massive scar on the side of her head and even stranger, a sexual connection to metal. In the present, Alexia (Agathe Rousselle) is working as a showgirl at a car show and we learn pretty quickly that she’s a deeply damaged individual, scarred literally and figuratively from her experiences as a child. After an outburst of violence (and the aforementioned experience with a car, which will have repercussions) forces her to go on the run, she alters her appearance to mimic the look of a young boy who went missing years earlier, convincing his traumatised (and now much older) father (Vincent Lindon) to take her in, his delight at finding his ‘son’ superseding any rational thought to carry out some due diligence with a DNA test.

Rousselle and Lindon are both terrific as two wounded souls who find one another and form a very odd relationship, and I liked that ‘Titane’ remains unconventional, provocative and surprising throughout, right to the end. It is little exaggeration to say this is possibly the most graphic film I’ve ever seen, with some of the most excruciating body horror I’ve ever seen – even David Cronenbourg couldn’t shock this much. I spent a good portion of the first 30 minutes with my hands partially covering my eyes and it only marginally dials it down after that (or perhaps I got used to it!). That is to say, if you’re at all squeamish, you might struggle with this.

‘Titane’ is a bold, wild and uncompromisingly violent movie that doesn’t so much explore its themes as smash them over the head, and it won’t be for everyone, but I was gripped and engrossed throughout at this weird and wonderful movie.