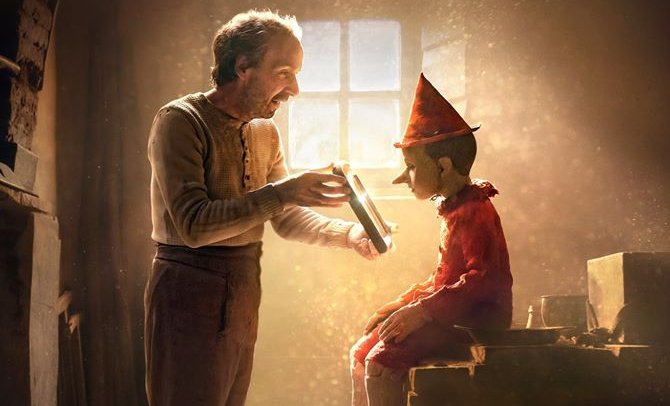 In the English language speaking world, most people will be familiar with the story of ‘Pinocchio’ through the Disney classic, so I’d caution that anyone checking out this live action Italian version (and you should!) may be in for a surprise. This is as far as I understand a much more faithful adaptation of Carlo Collodi’s 1883 book ‘The Adventures of Pinocchio’ and it’s a far darker take that borrows more from the macabre fairytales of the Grimm Brothers than the cutesy Disney approach. It’s directed by Matteo Garrone, an Italian director who is perfectly suited to this material after his stellar work on the underrated fantasy ‘Tale of Tales’, itself well worth seeking out.

The story begins in a village in rural Italy at some point in the past, when a poor carpenter called Geppetto (Roberto Benigni) builds a puppet from wood. The puppet comes to life and becomes Pinocchio (Federico Ielapi). The remainder of the film follows Pinocchio on his adventures after he finds himself separated from Geppetto. On this journey he encounters a variety of weird and wonderful creatures, some of whom mean him harm and some of whom wish to help him on his way.

I was incredibly impressed by the visual effects, specifically the prosthetics used to make Pinocchio and the other puppets look wooden, and it was great to discover it was done using practical effects and not CGI. The story may be well trodden but like any good adaptation, the style and manner of how the story is told is what matters, and ‘Pinocchio’ is an arrestingly odd piece of filmmaking.

This version of ‘Pinocchio’ may not appeal to as wide an audience as Disney’s original does (or indeed, Guillermo Del Toro’s stop motion effort, due out next year, will), but for those looking for a fresh and innovative take on this story, there’s a lot to love here and I thought this was an intriguing fairytale that brings the surrealism of Collodi’s story to an otherwise realistic and naturally crafted world.

Review courtesy of Up Late At Night Again

Did you enjoy Pinocchio 2020? Let us know in the comments.

For more foreign language films reviews, fly on over to the dedicated film section.