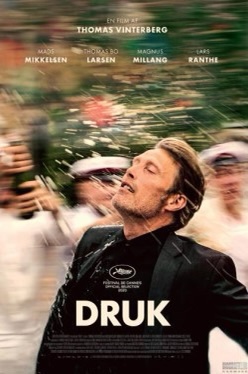 Middle aged angst means life is a little bit better when you are just a little bit drunk, but how long will the high last?

Four friends, all high school teachers, test a theory that they will improve their lives by maintaining a constant level of alcohol in their blood.

Thomas Vinterberg reuniting with his ‘The Hunt’ lead Mads Mikkelsen for a film about men going through mid-life crises and deciding to conduct a barmy drinking experiment – could a film more up my street possibly be made?! That is a loose description of ‘Another Round’, Thomas Vinterberg’s compelling drama that blends dark comedy with sharp insights about masculinity and what it means to reach a point in life where your youth is gone and you’ve reached a bit of a rut. I’m a massive fan of the Danish director’s work going back to ‘Festen’, and I consider ‘The Hunt’ to be a masterpiece and one of the finest films of the past decade, so the biggest praise I can give ‘AnotherRound’ is that it deserves to stand up alongside those two films.

The movie is about four friends in their 40s, led mainly by Mads Mikkelsen’s Martin. They are all teachers who on the face of it, have good lives, nice homes and steady jobs, but beneath this they share a belief that their lives have become boring and stale. In Martin’s case, his marriage is facing problems, he’s lost his passion for his job and he appears to be in a form of depression and in a rut that he can’t find a way out off. One of his friends mentions a Norwegian psychiatrist called Finn Skårderud, who has theorized that a human’s natural blood alcohol content is too low, and that maintaining a slightly higher level can make us more creative, more relaxed, ultimately leading to living a fuller, happier and more contented life. Martin is inspired to test this theory and his friends join him, with strict conditions set to maintain control over the experiment and to allow them to report on it as a true medical study. To discuss what happens next would spoil much of what makes ‘Another Round’ a superb film, but suffice to say it leads to consequences both positive and negative for the group.

I thought this was a really superb film that deftly balances comedy with tragic undertones, tackling serious and often underexplored subject matter with nuance and care. The performances are excellent across the board with the terrific Mads Mikkelsen as brilliant as ever in the leading role, and it’s directed well by Vinterberg, who captures both the intoxicating freedom and anarchy this provides the characters without skirting over the consequences of their actions. As someone who likes a drinking challenge on occasion there’s something undoubtedly comical about the theorizing behind the experiment, and I think the film does a great job of showing the dangers as well as the appeal to the four men.

‘Another Round’ is another excellent movie from Thomas Vinterberg with a typically great Mads Mikkelsen lead performance, and it’s one of the best films I’ve seen so far this year.